By Dan Avery For Dailymail.com

Scientists have increasing evidence that some distant planets are made of diamonds.

Stars like the Sun, with lower carbon to oxygen ratios, are typically orbited by planets composed of water and granite, with very low diamond content.

But planets circling stars with higher carbon ratios tend to be carbon-rich themselves and under the right conditions that carbon can become diamond.

To test their theory, researchers subjected a sample of silicon carbide immersed in water to intense pressure and heat using lasers and X-ray measurements.

As expected, the silicon carbide converted into diamond and silica. 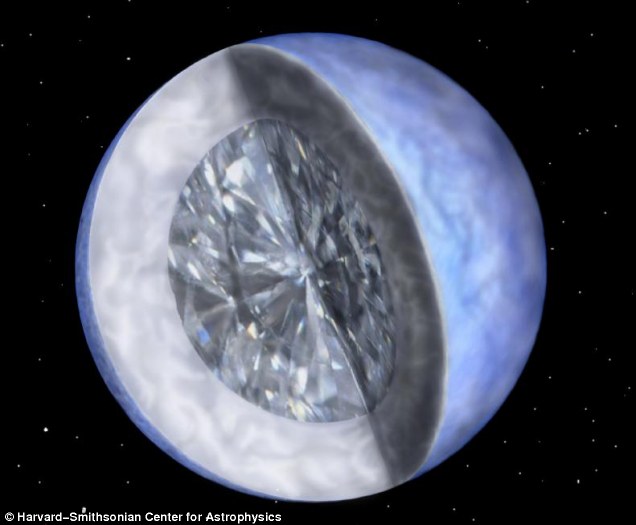 While Earth is composed of mainly water and granite, exoplanets orbiting carbon-rich stars are made of diamond and silica, according to research from Arizona State University

‘These exoplanets are unlike anything in our solar system,’ says lead author Harrison Allen-Sutter of Arizona State University’s School of Earth and Space Exploration.

His team re-created the interior of one of these planets using a diamond-anvil cell at ASU’s Lab for Earth and Planetary Materials.

In a diamond-anvil cell, two gem-quality single crystal diamonds are shaped into anvils and faced toward each other.

A sample – in this case silicon carbide immersed in water – is then loaded between the flat surfaces of the diamond and compressed under high pressure.

In a diamond-anvil cell, two gem-quality diamonds are shaped into anvils and faced toward each other. In the experiment, a sample of silicon carbide immersed in water was loaded between the  flat diamond heads and subjected to immense pressure, then exposed to laser heating. As expected, the sample turned into diamond and silica

To see how the sample would react under intense temperatures, they subjected it to laser heating at the University of Chicago’s Argonne National Laboratory and took x-ray measurements.

The silicon carbide reacted with the water turned into diamond and silica.

Carbon-rich planets are poor candidates for life, researchers say, because their lack of geologic activity means they have little or no atmosphere.

‘Regardless of habitability, this is one additional step in helping us understand and characterize our ever- increasing and improving observations of exoplanets,’ Allen-Sutter said.

‘The more we learn, the better we’ll be able to interpret new data from upcoming future missions … to understand the worlds beyond on our own solar system.’

In 2012, astronomers reported an exoplanet orbiting the star 55 Cancri A was likely composed of diamonds and graphite.

Some 40 light years from Earth, 55 Cancri e, formally known as Janssen, has twice the diameter and more than eight times the mass of Earth.

Janssen has a surface temperature of about 3,900 degrees Fahrenheit.

A year there lasts less than 18 Earth hours, the amount of time it takes Janssen to complete an orbit around 55 Cancri A.

Scientists estimate at least a third of Janssen’s mass – the equivalent of the weight of three Earths – could be diamond.

‘This is our first glimpse of a rocky world with a fundamentally different chemistry from Earth,’ Nikku Madhusudhan, an astrophysicist at Cambridge’s Institute of Astronomy, said at the time.

‘The surface of this planet is likely covered in graphite and diamond rather than water and granite.’

In 2016, The Hubble Space Telescope detected hydrogen and helium in the planet’s atmosphere, but no water vapor.